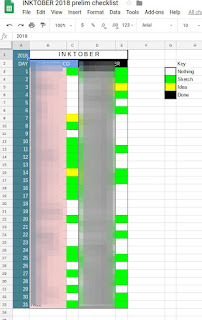 I've officially become that guy, that guy who uses spreadsheets for almost everything imaginable. I tried setting this up as a checklist in Evernote, but it wasn't particularly convenient.

It's currently the 20th of September, which makes it exactly ten days until the start of this years Inktober. This will be my third outing, I'm very excited for it, and maybe I'll get some of you to join in if you haven't already by talking about it here.
For those who arrived late, Inktober was started back in 2009 by an illustrator named Jake Parker. It's grown significantly in that time, and while there are many takes on it, but the original goes something like this: the official Inktober site publishes a list of 31 single-word drawing prompts, a slew of adjectives, nouns, and verbs. You've then got 31 days to bring each individual prompt to life through the traditional medium of ink. That's the barest of the bare bones about it, and as I said, there's no one approach as all artists are of varying technical skills, comfort zones, and work ethics.
Obviously, the important thing is to have fun, but of equal importance is to challenge yourself, push your skills, get out of your comfort zones, and try a new work ethic. Artists have a reputation for being rather persnickety and temperamental, working in a kind of ad hoc sort of flow. While I'm firmly of the opinion that creativity is not like a faucet or light switch that can simply be flipped on or off, I don't buy into the pretentious rhetoric that it's so elusive and nebulous that forcing it in even the most passive way would vaporize it on the spot. I think that's selling yourself short. Too many people see it like the Golden Goose; finding out what makes the fowl tick will stop its ticker dead, on account of being dissected. In reality, it's more like a muscle. You can injure it, of course, and there's certainly limits to what it can do, but you won't know it until you try, but it's best to take it slow, stretch it a bit, and pace yourself.

I like to follow the official prompt list because it's the most well-known and it creates a nice common ground to see what everyone else is doing and how everyone approaches the same challenge, often in wildly different ways.

For this year, the challenge I've set for myself is that I'm actually doing 2 prompt lists, the official and a new one I found on Instagram through a stationery company called MosseryCo. They're the pink column of the spreadsheet, with Jake Parker's being the gray. These lists are published in the early days of September to give participants some prep time, and I'm taking full advantage of it. I mean, I've got double the workload this year, so it's for the best. Yeah, this means quantity over quality (or at least some repetition), but like NaNoWriMo (in November) it's more about the process than the results. It's about getting rid of old and bad habits while trying to get used to new and good ones.

In terms of medium, I'm probably playing faster and looser than ever. My first year was fairly strict, I made proper, traditional ink drawings in my sketchbooks, and the only digital work involved was some color correction and lighting adjustments in post. My second year I tried a hybrid approach of using an Iskn Slate tablet to "record" my traditional drawings and then digitally paint over them. What both of these years had in common was that there was more than one occasion I made an exception to my own rules. This year, I had an idea that if there was ever a day when I couldn't come up with anything, I would look to the corresponding day on the other list and combine the two. As I've been going through the pre-planning stage, though, I haven't felt much desire to do that. While there are some common/recurring themes between the lists, they are ultimately separate entities that will be resulting in at least 62 full-fledged drawings. As for bringing those drawings to life, I'm keeping that open depending on what's best suited to the idea, but the majority of drawings will be made using Paper by 53. It's hardly the most robust drawing app. In fact, the fine folks at 53 will insist up, down, left, and right that Paper is not a drawing app, but a notetaking app geared towards more visual thinkers. It's meant for making flowcharts and Venn diagrams rather than full, proper illustrations. Of course, that never stops anyone from using it as a drawing app, hence their own hashtag #madewithpaper, but it's overall not the strength of the app. It's got limitations and even, dare I say it, some shortcomings, but that's what I love about it.

However you decide to participate in Inktober, I'd like you to keep something in mind. To crib a phrase from Stan Lee, every year is someone's first. If this is your first, I bid you welcome, hope you meet a lot of interesting people, and overall hope you have a lot of fun.
at 21:12 No comments:

This review is long overdue as I'd received this in the early weeks of July. I hadn't done anything with Arduino microcontrollers for nearly a year, the last big project being a few versions of Peter Knight's Auduino granular synthesizer. Fun as that was, I think I'll stick with some of my iPad apps when I need a backing track for a video. As for similar microcontrollers or single board computers, more recently I'd done a few projects with the BBC Micro:Bit, including an electronic die (1D6). Beyond that, there simply wasn't a lot that interested me to keep me invested in the scene. On the whole, the only serious electronics project I've had on my mind is a robot arm, but I'm in no real hurry to get that under way. As such, when Elegoo contacted me to review one of their Arduino Uno starter kits, I initially ignored it. When they contacted me again, I decided to reply to tell them I was only interested in a robot arm, which their kit would not really have been able to aid me with. Their representative mentioned Elegoo's intention to expand their product line to include more robotics kits, so I'll admit I will be looking forward to see what they can offer.
In the meantime, the more I thought about it, I realized taking on a robot arm would be a little outside my area of expertise. Synthesizers are fairly straightforward, as are guitar pedals, and while I'm still currently building a 3D printer for my job, it's only busy work and fine-tuning at this point. That's when I thought of a tilt and pan head for a smartphone. It was a good, simple project that seemed the perfect gateway drug for making a robot arm. Arrangements were made, and I received my kit within the next week.


I've gotten Arduino kits before, which I'll often advise over buying them on their own, as even if you use only half of the included components in the starter kit, it's often a far better value than sourcing your components later (better to have and not need, etc.). Still, as a rule, these kits tend to be fairly sparse, even in the higher end of the price range. You'll get the UNO, a few jumpers, resistors, and LEDs, with the rest being an assortment of odds and ends very strongly geared more towards instructional purposes than anything practical. If you're using these in a classroom setting, you'll be lucky if the stepper motor lasts the full semester, while the box it all came in will live on as a pencil case passed down through the generations. With this Elegoo kit, however, albeit I didn't pay for it, I can say it feels like its typical asking price. Nothing feels like an afterthought, though I am going to say some of the inclusions feel a little half-hearted.

One accessory that really surprised me in terms of its practicality is the DC power converter. It's meant to plug into the included breadboard, supplying your choice of 5V or 3.3V to the power and ground rails. This turned out to be a very efficient solution for supplying power to the Arduino itself as well as the two servo motors. The converter itself can be powered via USB, but it also includes a barrel jack for a 12V power supply. Instead of providing this, however (likely due to international considerations), we get a 9V battery and a simple wire adapter. 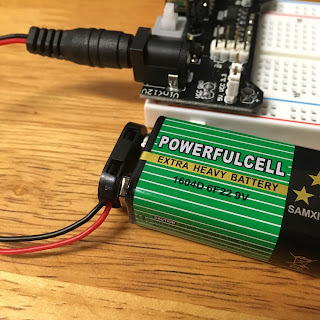 Again, this isn't a knock against it, but it wouldn't have been missed were it not included. If anything, one would probably get more use out of it if they cut off the barrel connector and used the battery with some other arrangement, maybe a wearable or something like that.

As for the included CD-ROM: 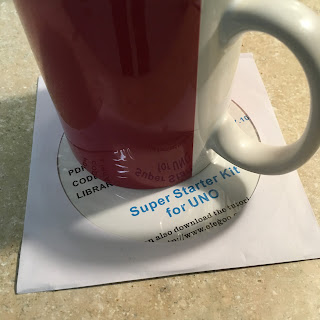 At this point in time, I just about refuse to believe it's any way economical to print a bulk order of CD-ROMs. I can't even tell you the last time I installed anything anywhere from a disc (my Playstation doesn't count). Going back to the school setting, between Chromebooks and tablets, it would only make sense for a teacher to get a copy of the disc on the off-chance they're not able to download the contents directly from Elegoo's site on that particular day. Speaking of downloads, I do wish it was possible to download a single language or individual lessons rather than the entire package at once. Sure, 110MB is small and the information is as useful as it is extensive, but it's not especially convenient for quick reference. As for the disc, I'd rather see a flash drive included containing the files. It would be more readily accessible on modern devices and being writable would make it handy for students to modify and share Arduino sketches with each other, among any other practical uses one may have for a flash drive.

Anyway, back to practical applications. The following is my best effort at getting the most crucial components of a tilt-and-pan head underway:

This is where I had problems. I didn't program any kind of delay into the action, and with how responsive those servos are, my rapid movements may have stalled them. It's a minor problem that's easy enough to fix, but even if I managed to fry these little guys, they're as inexpensive as they are commonplace. That's not a knock against the quality, just a reminder these kits are for education, experimentation, and prototyping. Once you've ironed out your bugs and kinks and whatever, these parts are all, as we've said, fairly commonplace and easy enough to source. As such, Elegoo has managed to provide a rather robust sampler dish for the DIY crowd.
at 10:20 No comments: