When I Get Mad (vent art) 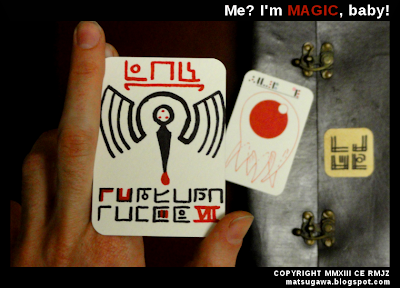 This is how I troll people, apparently.
Some self-affirming hack on DeviantART was using a template editor to take artwork from the likes of Genzoman (one of the most recognizable artists on DA apart from SpaceCoyote or JollyJack) and make custom MAGIC: The Gathering cards (complete with a copyright notice attributed to Wizards of the Coast, making the whole "not affiliated" disclaimer more than a little suspect). After calling him out on padding his gallery with 60 of these things, he retorted with the classic, "I'm a fan paying homage." excuse that may have held water if he was just showing a tutorial or a single card as an example (another claim he made in his defense) of using the editor. I pointed out how broken his logic was, and asked why he didn't ask permission of the artists in question if he was so certain his intentions were pure. He proceeded to disable comments on all 60 of those uploads. In the few minutes between when he did that and when he actually took down all the cards, I made this one card-like object in about five minutes with a Sharpie and about half my full attention.
When I came back and saw he'd cleared away his padding, he asked a favor of me, that since I'd trolled him with such animosity (five comments on sixty uploads, one of which was suggesting he make a tutorial is trolling in his mind.) that I do the same for "everyone else" who makes cards as he had done. This makes two very stupid assumptions, that "everyone else" doing something diffuses his own responsibility, and that I haven't already confronted others of his ilk, thus singling him out. Well, when you try and justify your bullshit behavior with weak excuses and broken logic, of course I'm going to respond to tell you how broken and weak said counterpoints are. That's not trolling, that's a discussion. You just refused to realize you had no high ground, that the conversation wasn't going your way, and that on the whole it was about the only attention your gallery was getting.
at 23:22 No comments:

OR: Barnes & Noble, I Am Done With You!
Tagline: Unfairly, I admit, but done, dammit!
So, one of my New Year's resolutions was that I wanted to get into tabletop gaming, something I've always skirted the edges of, but never fully dived into apart from some gateway drugs like Hero Quest, Magic: The Gathering, owning a lot of Palladium books (mostly Robotech), & playing a single game of Battletech. To rectify this, I bought the Red Box from Thinkgeek and looked through its materials. Also, for reasons I don't recall at the moment, I wanted to play as a Tiefling. I had an idea for a character, but I didn't have any technical data to play as one. I did a lot of sloppy research and worked out that I was going to need the Essentials Rules Compendium and the Race Handbook for Tieflings. The former is a condensed version of the 4th Edition Player's Handbook and Dungeon Master's Guide, the other is basically a magazine (that will become important later).
I got a coupon from Barnes & Noble or, as I like to call them, Not Borders, and thought this would be the perfect chance to pick them up without waiting for them in the mail & potentially getting burned by finding out they're not what I need after all. I'm normally weary about "in-store pickups" but I've got that kind of luck where I could be after the most obscure thing in the world and get beaten to it by someone more offbeat than I pretend to be. I put in the reserve for the Tiefling race book (the magazine, a point I'll explain in a moment) and waited. This was Friday night, so I didn't get the message until morning. The message said that despite being listed as "in stock" it could not be found and put on reserve. No biggie, I thought; most of the reviews said it was only an art book of sorts. I tried to reserve the Compendium and had better luck. One 30-minute drive and a missed turn later, I got to the store with the coupon in my pocket.
It turns out there was more than one copy of the Compendium in stock, so I didn't have to do the potentially awkward thing of picking up the book at the desk and asking to look through it before purchasing it (that probably happens all the time, but it just feels awkward to reserve something and then DEMAND to inspect it--I'm the sort of guy who will go down the other aisle in a grocery store and double-back to where I need to go rather than simply excuse myself as I squeeze past someone's cart). Anyway, my research revealed the book was a bit vague on how much of a "condensing" of the two aforementioned books it was, with some of the races and player classes being relegated to a pair of companion volumes, which we'll just call Purple and Orange because I don't remember their names and don't feel like looking them up right now. It turns out Tieflings aren't in the Compendium, but in the Purple book. Fine, I thought, but I ended up deciding against getting the book anyway as it didn't really offer me any real information I hadn't already gathered (legitimately, I might add, no piracy or scans or downloads like that).
I should mention now that the Compendium, along with Purple and Orange, are thick paperbacks with very wide spines, distinctly standing out from the other books that usually crowd the gaming section of a bookstore. Meanwhile, the Tiefling race book is a pithy, staple-bound affair that can be fairly easily hidden between two larger books or campaign modules or DM screens or any such shelf-stretchers. As I was looking through the other books, including a Pathfinder book which actually had a lot of cool information about Tieflings I won't bore you with (except to say, they were really neutered between D&D 3.0/.5 and 4th Ed.), I came across the Tiefling race book. Apparently, no one had bothered to look any harder than simply glancing at the spines. I doubt they'd even actually set aside the Compendium, just leaving it there, figuring no one else would pick it up.
After pacing back and forth between there and the Moleskine stand (where they had one pocket-sized watercolor book left that I almost got instead), I resolved, "Screw this crap." and stormed out, even throwing my coupon in the trash outside.
I went next door to the Best Buy to look at laptops, and made an ass of myself as I tried to figure out how Windows 8 is supposed to work. I still can't get around the fact that the "desktop" is an application tile. That's insane, like having to call 411 to get your own number. Plus, is it just me, or are more desktop apps designed like mobile apps in that there's no real way to quit them? If it wasn't for Skype and better hardware compatibility (namely webcams) I wouldn't even be looking at Windows devices. Still, found a really cool Vaio. We'll see what happens there.
Some other crap happened, but it's more minor inconveniences amplified by all preceding events, so I won't go into it here. 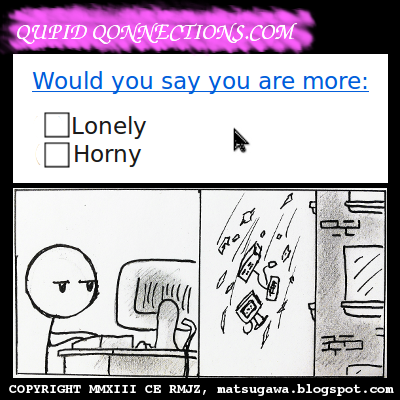 HAPPY INDUSTRIALIZED EXCHANGE OF TOKEN AFFECTIONS DAY!
at 06:00 No comments: 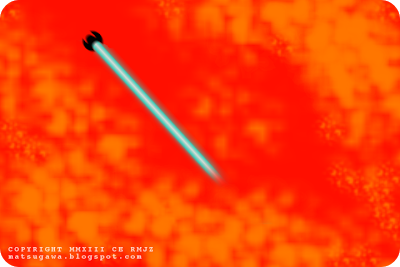 Released as RABID RALPH'S ROCKET RHAPSODY in the US with terrible, terrible box art not unlike the image above because we're uncultured swines like that.
Anyway, just something I farted out in GIMP in ten minutes—including a bathroom break—after watching that Futurama episode where the Martian doomsday rocket leaves earth, cutting a lovely blue streak against an orange, cloudy sky.

Also, someone somewhere posted this diatribe (against a gradient background they probably labored over for hours) about how science has ruined their imagination, making them second guess and scrutinize every piece of fantasy art they either come across or make. To that person, I offer this image and these words:  SUPERNOVAS TURN OXYGEN INTO GOLD. That fantastic enough for you?
at 21:27 No comments: 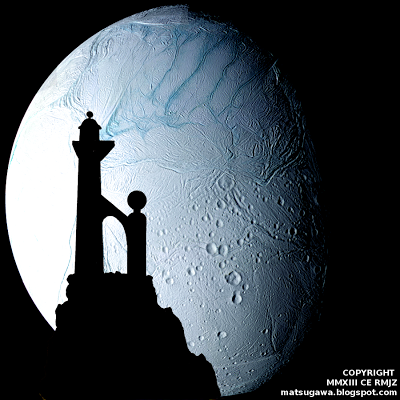 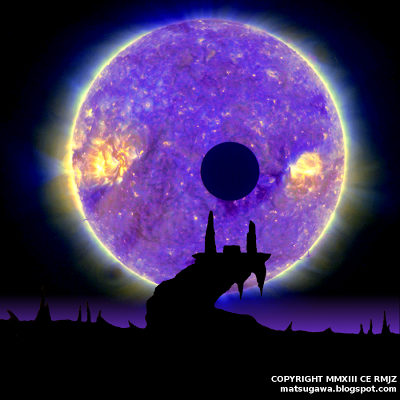 Just mucking about with some NASA photos, taking full advantage of the public domain status of most of their images.
at 00:48 No comments:

KNOWS BOTH PEACE AND PAIN 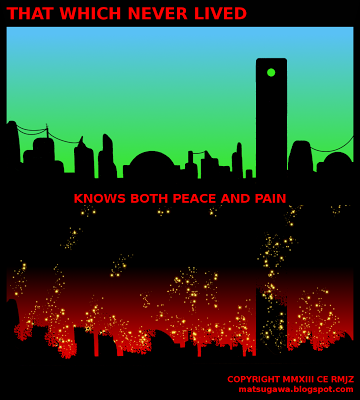 Meant as an establishing shot for the previous comic, this ended up getting not only its own piece, but a second panel. In fact, these were going to be two separate images, but they really work best as a graphic match. Very fun to make, lots of micro-managing different layers and transparencies. Got into a groove and put the whole thing together in a day, with about a previous day of off-and-on sketching ideas and concepts, most of which didn't work out.
at 20:44 No comments:

THAT WHICH NEVER LIVED 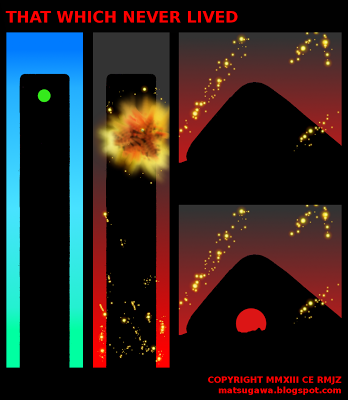 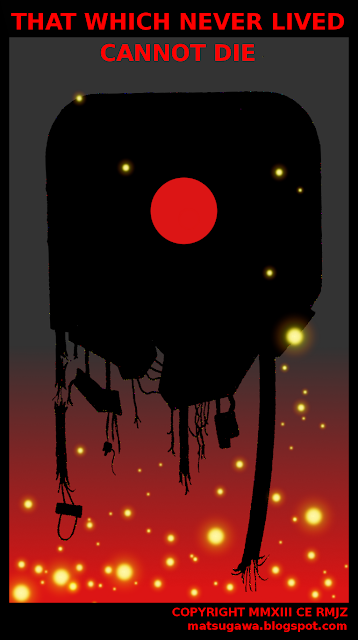 The first, and very small, chapter to a much longer work I've been hacking away at the past few weeks. It's very prototypical right now, and this is meant to work as a fairly standalone piece anyway, so don't hold your breath. Even if the next part is a "sequel" it'll focus on the forces (right now I'm sticking with the name Guardians--not the owls or the holidays, not half as cool, anyway) that brought this megalithic watchtower down and gave it the resolve to rise from the ashes to kick technophobic ass.
at 15:05 No comments: