Half a Mind to Have and Have Not 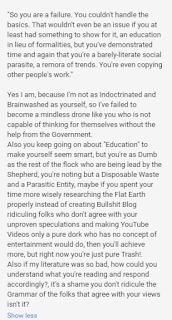 Let's talk about grammar, spelling, and an overall command of punctuation for a moment. There's a possibility I've gone over most of this before, so if you think you already know where this is going, you won't be missing anything.


The Gadget Guy asked why I don't ridicule the grammar of people who agree with my views meanwhile it's somewhat the focus of my caricatures of him.
Short version: I don't honestly believe there is any such thing as perfect grammar, not in English, anyway. The language is too big a mashup for anything to mesh properly. Still, while I let out the odd "teh" or "lead" when I mean "led", some people have a batting average so much lower than mine, so much than the rest of the team in fact, the other team throws the game out of sympathy.
ShortER version: You're just that bad.

Now, as for why I seem to play favorites:
The reason has to do with the definition of pretentious.
"attempting to impress by affecting greater importance, talent, culture, etc., than is actually possessed."
To that end, if you're going to claim to be intelligent, observant, and articulate, or otherwise having an inside track on some unknown truth, it's not unreasonable to expect you to demonstrate the skills necessary to understand this information in the first place.
If you've ever seen Apocalypse Now, you might remember that journalist who basically thought Marlon Brando was the second coming. One of his lines about "reality" goes something like this: You can't go into space with fractions.
This line sums up exactly how The Gadget Guy "thinks". While it's true mathematics in and of itself can't help anyone achieve anything, it's application does. When Galileo said, "Math is the language in which God has written the universe." he wasn't being literal. He was saying that merely using philosophy and direct observation was not enough to understand the world around us. There wasn't anything inherently wrong with it, simply that it was misapplied. Mathematics and the scientific method provided a mechanism to prove hypotheses and spot any falsifiable aspects. Consider the moon, how eclipses were seen as ill omens by primitive folk, while those who knew better not only knew there was nothing to fear, but could even predict their occurrences. In fact, it can be used to one's advantage, such as Christopher Columbus using it to convince the Native Americans he was god-like. Arthur C. Clarke illustrates this in his Third Law: Any sufficiently advanced technology is indistinguishable from magic. This all finally brings us to Friedrich Nietzsche's master-slave morality, wherein the values of "haves" are judged by "have-nots" as having evil intentions by default, a resentment of other's sentiments. In a roundabout way, it's envy. Worse, rather than the type of envy that may motivate people to transcend their betters (inspiration), it's the type that takes its bat and ball and goes home... after setting fire to the field and bludgeoning the other players unconscious.
at 08:39 No comments: