Rather Embarrassing, OR: how to expect the unexpected from the unpredictable 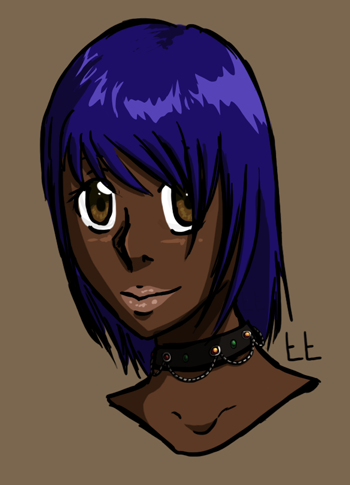 Whenever I commission artists for projects or characters or simply to show my support for their work, I like to give them as little actual detail as possible, however developed the character of choice may be. There's a few reasons for this, namely that I hate being THAT client who nitpicks over every little detail to the point where the artist actually becomes the least important part of the equation. I've heard many a horror story about artists being essentially pushed not only outside their comfort zones, but also beyond their trademark skills and techniques, essentially reducing them to an impromptu ghost artist. When you commission someone, it should be because you like their style and believe it will work with your original vision, if not build on it. In other words, I want to be surprised at what they come up with just based on a concept. I mean, I could do all my own artwork for my written fiction and whatnot, but I'm a big believer in the notion that, "familiarity breeds contempt."

My brief to Kakumey regarding a recent commission was simply "Cel-shaded portrait of a woman with blue hair and a choker." She asked about other details such as eye color, and after a little thought, I said, "Well, maybe pale green or very dark blue, almost navy, but overall up to you. Surprise me." What I didn't quite tell her, and maybe should have, was that there was a little bit of an agenda in terms of usage.

For my DeviantART page, I was going to make another collection for my favorites, one specifically for women with blue hair, as I'd amassed quite the collection, and wanted to use it as the key thumbnail for the collection. Once at the collection's page, there would be a little description to the side, as is typical with collections and gallery folders, mentioning how one of my favorite reviews from Classic Game Room is YS I & II Chronicles for PSP leading to the following quote from that review:

"... a magical land whose main export is hot chicks with blue hair."

So, when Kaku sent me a tweet informing me that she was finished, I hopped onto Skype and saw the portrait, my reaction I think gave her the wrong impression. I was not offended or disappointed, just surprised (pleasantly, even), and then suddenly very, very embarrassed:

Granted, the collection was tongue-in-cheek from the start and not meant to be at all misogynistic or objectifying, let alone racist... and objectifying. The lesson here is that, when commissioning an artist, there's nothing wrong with being brief and concise, but you may want to let the usage be known if you've got something in mind, just in case.


In the interest of full disclosure, I'm not racist... in fact, I maintain that it's physically impossible for me to be; I'm originally from Madison, WI, where we have a 3% black population. We don't even call them blacks or African-Americans, we call them the Green Bay Packers. I'm probably going to Hell for that joke, but if you've ever been to the midwest, it probably doesn't seem that funny for how largely true it is.

I'd never heard of this until a YouTube partner by the name of The Archfiend pointed it out. Apparently, a common (or once common) trend on YouTube was for people to post a comment, either on a video or a user's channel page, to the extent of "Sub4Sub" meaning, "If you subscribe to me, I shall return the favor."

For reasons that probably shouldn't have to be explained or explored in any great detail, this is really annoying, unfair, and, in the case of those asking, downright pathetic. Put simply, their channels are so bad, so borderline invisible, and so obnoxiously underwhelming that they have to ask people to subscribe to their channel in exchange for their pretend patronage.

Luckily, YouTube, in a moment of genuine interest in the goings-on of their site, decided this had to stop, and not only said as much, but literally found a way to prevent it. Now, if someone types "sub for sub" or anything along those lines, the comment does not post. The pathetic excuse for a human being begging for attention will get an error message that the comment cannot be posted due to an "internal error" which is a polite way of saying, "Get a damn life, you scum-sucking bottom-feeder." This technology isn't actually new, as many web-hosting services and a few online games have filters in place that seek out specific words and either erase them, or replace them with something else. It's typically reserved for obscenity and various foul terms, but YouTube has discovered it can also be used to keep people from mooching off of others. Again, genius.

YouTube also has a program that can "listen for" copyrighted music in videos and either mute the video or, as is more often the case, send you an e-mail asking if you'd like to allow a link to a legitimate download service (like iTunes or Amazon) to be posted alongside your video. Of course, it's not really a question, just a kind of gentle warning. They'll only post the link if they can actually get the rights to the song, otherwise they go with the muting option. In essence, they're trying to work with you, reach an agreement of sorts with the record labels so they don't take you to court for all you're worth plus interest. I've always felt the "free publicity" defense often used by people who use copyrighted music illegally in their videos is incredibly weak, tantamount to the spoiled child throwing a temper tantrum and screaming, "You never loved me!" but somehow YouTube has found a way to make it work. I may not approve of a compromise like this, but that's not the same as opposing it.

And yet, despite these capabilities at YouTube's disposal to help both its community and entertainment providers, I still see users posting full movies either in parts of around 10, or even, with the recent set of site changes of late, in single uploads. Granted, with the way the DMCA works, YouTube can't officially make a move against the offending user unless the original copyright holder files a formal complaint, a condition I consider akin to taking someone's car keys and throwing them in the river, insisting that it is not grand theft auto as the car is exactly where it was when the owner originally parked it and no one else has the keys. YouTube has created a kind of relatively safe haven for people to post videos that are not their own yet claims total immunity for what people do with it. Fair in principle, possibly, but jury's out on the practice. The point is, if they're willing to actively work and cooperate with record labels before any legal paperwork is filed, and set up parameters that flag comments for spam, why isn't there a means for automatically flagging videos that are of full-length feature films? Where's the misgiving about what exactly is going on with that user's channel? Sure, clips are tough to peg down as offending because they're only a short portion and often given at least a little context, such as hosting the video on a weblog for review or critique and putting a link to the journal in the description. Exhibiting the film in full, however, hardly counts as fair use, regardless of any attached analysis.

Copyright is far from a black and white issue, but it's not a complete gray area, either.
at 21:03 No comments:

My Letter to Rep. Pete DeGraaf

In regards to this article, I visited the website for Kansas Representative Pete DeGraaf and took advantage of the "contact" option to send this message:

You have got to be the most ignorant, insensitive, and borderline-brain-damaged politician I've ever had the misfortune of reading about.

What kind of moral fiber considers an abortion a worse offense than the rape that led to it, such that women must plan for such a contingency? If men were the ones who carried the child instead of the women, how would you feel about that policy you voiced your support for?

For the record, I am not a resident of Kansas House District 81, and knowing that "things" like you can even exist in my lifetime makes me appreciative that I don't live within so much as the same zip code as you or anyone out in that state that might support you.

You are a born loser and you deserve nothing good in life, ever. I feel sorry for everyone that has even so much as heard your name.

Get stuffed, you cornholing buzzard.