Oh, Not Funny When It's You

So, some time ago, Star Wars Kinect was released for the XBox360, and it was met with what could charitably be described as mixed feelings, with most of the negative feelings strangely centered on a rhythm and dance portion of the game wherein much-beloved characters dance in well-known locales to popular songs made into parodies by a slight tweaking of key lyrics. "Princess in a battle" instead of "genie in a bottle" is one example.
As to why this has many fans outraged, there's no official answer, but if one were to be culled from the general consensus of the gaming community, it's that Star Wars Kinect is an officially licensed Lucasfilm product. In other words, Star Wars fans can make fun of their beloved franchise to their heart's content, but heaven forbid the people behind it have a sense of humor as well.
I could get into the psycho-socio-cultural underpinnings of this phenomenon, but The Escapist's MovieBob already did, and in reading his analysis, I remembered something from my own childhood that perfectly exemplifies the situation.

It was really hard for me to make friends after I moved to New Mexico in 1991. There's a lot of reasons for this I won't go into, but probably the most important one was that my sense of humor didn't gel with everyone else's. I understand that friends take digs at each other, call each other names, and even play mean little tricks on each other. Really, I get it; it's part of the trust, it's something you can do because of the comfort zone. The thing is, where I saw it as being "part" of the whole "friendship" paradigm, some people saw it as "the whole" and that struck me as just downright conceited. I kid you not when I say that I actually lost a really good friend because I told him to stop calling me a certain name because it genuinely bothered me. For years afterward, I thought there was something wrong with me because I just couldn't take a joke, I couldn't separate "laughing with" from "laughing at." Years later, I got a second opinion. The good news is that there wasn't really anything wrong with me, that sometimes people were just jerks. The bad news is that the number of jerks turned out to be higher than I'd thought.
My 7th grade history class had some class clowns in it. Trouble was, it was a de facto role as they weren't very good at it, as most of their jokes relied on me to be their punchline, whether I wanted to be or not. How exactly they made fun of me or laughed at me or generally had fun at my expense varied and changed almost daily. For about two or three days, though, the fixation was on the fact that I was the only boy in the class who wore glasses. Right away, I thought, "they're really desperate for a laugh." Seriously, the last months 7th grade, a year between us and high school, and I felt like I was living out an uninspired episode of Full House.
Anyway, we were all doing some sort of art project that I don't remember any details of, except that we'd have to stop about five minutes before the bell so we could all go wash up in the bathrooms. So, here's the scenario: everyone walks a little faster than me so they can get there first. When I step in, everyone turns away from the sinks and starts flicking their hands at me so water beads on my glasses, carrying on until I literally can't see and have to take them off to wipe them clean, and the process repeats when I put them back on until I get out of the bathroom, my hair wet enough that I can slick it back.

This goes on for two days. I don't get angry. I don't lash out. I don't confront anybody about it. I don't say a word.  I just stand there and seethe quietly to myself, because it's the seventh bloody grade, we're in our early teens, and flicking water at my glasses to where I can't see is the funniest damn thing in the world to these guys. On the third day, I figure that maybe I'm taking this too seriously, that I'm not having fun with the whole thing. So, I decide to give this "laughing with you" idea a shot. Again, everyone walks a little faster than me to get to the bathroom first. Before I step in, though, I take my glasses off and put them in my pocket. I make sure not to squint, because that would just give them something to laugh about. I walk in, knowing what's going to happen next, and I'm smiling. It's not a toothy, ear-to-ear grin, it's more like a Mona Lisa, at the risk of sounding pretentious. The funny thing is, I'd never felt more confident in my life at that moment. The sad thing is, no one else found it funny, made apparent when they turned away from the sinks with hands at the ready.

I'd see some turn away from the sink and watch a smile disappear almost like someone flipped a switch. Instead of knowing nods, playful shrugs, or even indifference, I saw, despite the blur, frowns and eye rolls. I hadn't gotten in on the joke, I'd ruined it. I'd ruined it by not ignoring them or getting angry or annoyed or anything like that. I'd ruined it by wanting in on it and playing along. They weren't making fun of me to be friendly or chummy, they were making fun of me because they were that desperate for a laugh. How dare I, apparently.

Maybe I should have grabbed a fire extinguisher before going in instead.
at 21:57 No comments: 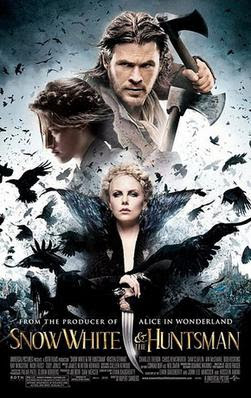 Just got back from Snow White and the Huntsman, and I'm not even going to make a comment about Mirror Mirror leaving bad taste in my mouth and this being the cleansing swig because it's an unfair comparison.

In the interest of full disclosure, let's address the elephant in the room: I have never seen the Twilight movies. Actually, that's a lie; I've seen five minutes of a scene with two groups of vampires comparing notes on feeding habits and it pretty much told me all I need to know about what I'd be in for if I stayed and watched the rest. I bring this up because my roommate has seen the Twilight films and as such her biggest hangup about seeing the film was Kristen Stewart, fearing a wooden performance.

I think she gets a bit of a bum rap. Granted, the only thing I've seen her in prior to this was Zathura, where she played the older sister of the two boys. Not much meat to the role, but I liked her in it.

Something most people will probably notice right away regarding performances, hers as well as others, is that dialogue is rather sparse, and given that Stewart has a fair amount of screen time in the first act, people might be led to believe that her part was toned back because of fear about her ability to deliver dialogue. This really isn't the case; overall, it's a very visual film with very long passages of silence. I think that's one of the film's greatest assets, not feeling like it has to hold the audience's hand or keep spouting little throwaway lines of expository dialogue. What little dialogue there actually is serves almost as padding. Seriously, this would make a dandy silent film.

At the risk of sounding like I'm gushing, and going back to what I was saying about Kristen's performance, I think she's one of the best female leads I've seen in a fantasy film. She's got a very rare quality that I first heard leveled at the late Elisabeth Sladen by former Doctor Who producer Barry Letts. He said of her:

"She could be frightened and brave at the same time. Most actresses can only do one or the other."

This is also how I felt about Naomi Watts in the Peter Jackson remake of King Kong, someone who has a confidence and inner strength, but is also a human being with a full emotional palette. On that note, I think my favorite scene in the film (stop reading if you don't want any spoilers) is one where she stares down a monstrous troll that's just made a rag doll of the Huntsman and sets its sights on her. Admittedly, it waxes incredibly silly, but it made me smile and, frankly, if I made a fantasy film, you bet I'd have a scene like this. It's Dorothy slapping the Cowardly Lion, but done better. It speaks to her character, saying, "Look, I'm cold, tired, and terrified, but damned if I'm going to run now!"