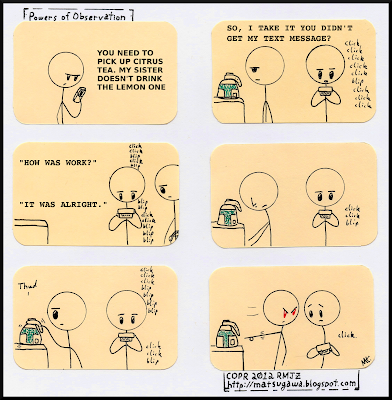 I just don't understand people, sometimes.
Normally, this doesn't bother me, but when it's someone I used to be able to read like a book, it makes me wonder what changed. When you're in a relationship with someone that you care deeply for, you get to a point where the slightest twitch at the corner of the mouth speaks volumes not in the slightest bit cacophonous or overbearing, but instead perfectly coherent. Maybe it's just familiarity and observation, but what does it say when that breaks down or, in my case, completely disappears? My only real guesses are it's either some kind of defense mechanism, or that you maybe weren't really reading them all that well in the first place and you've only just now worked it out. What's worse is that even when they're just speaking to you as they normally would, you wonder how you ever understood anything they said at all.
This particular person whose actions (and, most importantly, words) have led me to write this (after a few very stiff drinks... but that's another matter) has an almost schizophrenic approach to daily life, without actually having the condition. She doesn't communicate very well, and always has a ready excuse. To her credit, the last incident of note was because she had a cat in her lap that she'd just rescued from some negligent owners en route to the pound. Even still, her thoughts were elsewhere:

These were text messages, and after sending that "Oh." the next line got its own text message barely thirty seconds later while I debated whether or not to answer or just wait for her to give me more information regarding whether or not I was busy:


She: Cause I'm hungry and mom's not stopping.

Seven minutes later, again as I try to debate answering her. I mean, what am I supposed to do? Why is this suddenly my responsibility? Was it selfish of me to eat while she was out spending the day with her mom and sister (which I only learned of when I got home from work that day). Why am I supposed to pick up the slack for that? If that's not the case, then why am I being told this?


She: what do you get me from Hardee's?

Then, while I'm typing the reply, working out that she convinced her mom to stop for food:


She: [my sister] and I are gonna stop there.

Here's what gets me: she's in the same car with her mom and sister. If I wasn't trying to maintain what little patience I have left for her (things have not been going well for a few months, but I've tried to make the best of things), my reply would have been along the lines of, "No kidding." but with more colorful language. The issue is essentially one of either not getting enough information or getting so much that it's impossible to get a word in edgewise and move the situation forwards. I have to drag essentials out of her only to get multiple and fragmented messages about the logistics of satisfying impulses while carpooling. This brings us to today, as I'm driving home from work, having stopped briefly to gas up my car:


She: You have any cash? I need stuff from the store
Me: Like what?
She: Gallon of tea, [my sister's] coming over tomorrow, apricot scrub... something for dinner.

So I get an appointment in the middle of a grocery list. Logically, I think this holds relevance, but the place it's wedged into immediately trumps that logic. Thus, I ask:


Me: So, should what I pick up for dinner be for tonight or for when [she] comes over tomorrow?
She: Tonight.

Then why bring it up, least of all in the middle of a list of things to get? Whether or not she comes over has no bearing on what I do when I get home from work. Maybe there's a little bit of time spent on catching up with what's been happening with the family or some useless piece of trivia that turns out to be wrong


Short story: I have a blue light bulb on our porch because I like the color and it stands out, she tells me it's to signify a gay residence, I do research and find at least six "meanings" to blue outdoor lights, NONE of which have anything to do with the gay community apart from transvestites in Amsterdam.

I just don't get how someone's mind can work this way when writing out a message. In casual speech, sure, it's easy to insert some random piece of information, but when writing a list...? Like I said, there are always excuses when I get messages like this, most of them having to do with being in the middle of an online multiplayer game and talking to at least one other person via Skype. Others often just have to do with not giving a damn about being understood, which wouldn't even be so bad if she didn't spew bile and rage when asked for clarification. Yes, it can be annoying to repeat one's self, but getting mad at someone else for not being able to understand you when you're barely trying to be coherent is like being mad at yourself for having your hands over your eyes and thus not being able to see in front of you.

Apparently the moon and Belgium are more readily available as a bundle than any one of these simple wishes.

I give up. I give the Hell up. I'm through being a remedial English teacher to a native speaker who throws a temper tantrum at 3 in the morning because their "grammar check" plug-in won't work with their browser. That statement is equally metaphorical and literal.

I don't know very much about biorhythms or ever took much stock in them to begin with, but somehow fall is always a rather hectic time for me. I remember one day, just after I'd graduated college, my dad said to me, "This is probably going to feel very weird for you, huh?" When I asked him what he meant, he observed, "This will be the first August since you were maybe five years old that you won't be getting ready for school." Maybe that has something to do with it, along with the changing of the seasons (Seasonal Affective Disorder), the onset of the holidays (including my birthday, my father & mother's birthdays, Thanksgiving, Christmas, and New Year's) and all their incumbent stress.
The point is that I realized how long it had been since I made an entry here and in my frustration I'm trying to find a rational explanation for it. Years ago, all the way back on the now-defunct Yahoo!360, the first weblog I ever had, I made something of a promise that if I was going to have an online journal and build up any sort of audience or circle of friends, I should try and aim for at least one entry a month, my thinking being that my journal was like any other regular periodical, namely a magazine as I never really focused on anything topical so as to address an issue with urgency.
Another reason is that a few weeks ago I hurt my back really bad. The short version of the story is that I slept wrong. The slightly less short version of the story is that I slept wrong and my computer chair wasn't helping. In fact, said computer chair is in a dumpster and couldn't have gone that way sooner. As such, I didn't have a way to sit at my computer for long periods of time, thus making even the shortest journal entries a bit tedious. I managed to work around some of the issues this presented by hooking up my keyboard to my Playstation and using its internal browser to handle most of my networking, especially on DeviantART. I also got a new phone with a decent data plan and a fairly robust browser. The trouble with both of those is that the Playstation's text entry mode has a character limit (much like the PSP), and the phone's touchscreen keyboard is a little hard to work with.
Luckily, I've managed to inherit an old computer chair from my roommate which is just bearable enough to let me bash out a few entries here and there, particularly on my DeviantART page. That's why I'm going to be relatively brief here and just present a series of videos I'd posted to YouTube over the past few months about some junk mail I'd received... repeatedly.