This has been a rather hectic week, very draining. I mentioned on Wednesday on my DeviantART account that I sort of had my weekend early. I've been making uploads there nearly everyday, whereas typically I sketch and plan during the week, leaving "showtime" for the weekend. It generally works out as I sometimes have a habit of staying up too late when I work on art; not so fun for workdays, but fits in fine with my weekends. This week, however, I've been a bit antsy and fidgety. I'll get very irrational and jittery, wanting to work on stuff, only for the feeling to peter out and die as soon as I start. I'll tell myself I have to do something, and then do eight other things to avoid it. That may sound like plain ol' procrastination, my mind essentially taking the easy way out to get a sense of accomplishment, except that what I've been doing to put other things off have been more engaging, take more time, and probably give me a much greater sense of satisfaction. Looking at it now, though, while I certainly felt like I was pouring myself into the work, it doesn't quite show through sometimes: 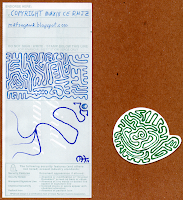 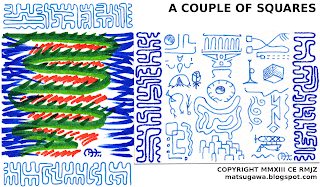 That last one just began as an idea for making the center of an Artist Trading Card square by having lineographs in the borders. I had no idea what the content would be, so I just went with it, and I think they frankly look terrible. I fell back on old habits like trying to pass off obscurity as talent. It feels like I might as well have posted pages from my notebook with an Instagram filter slapped over it. I tried to push myself forward, thinking that if I make a lot of stuff I can make up for the lack of quality with quantity. Really, it was acknowledging spreading myself thin. In my defense, I do have an upcoming painting project that will involve making 50 similar pieces, so I am legitimately trying to make myself produce as much as possible for reasons other than a self-defeating defense mechanism. I wish I could apply that excuse universally, though.

Most of what I've been putting off are things I have to write. It wouldn't be any big deal except that they're essentially replies to people, all somewhat related, and rather taxing. They don't get particularly personal or anything, but they are nonetheless revealing and honest.

It involves two journal entries on DeviantART about Anita Sarkeesian's video project Tropes vs. Women. Why two? Well, one is the actual criticism I have for her work (Short version: subject matter's fine, my issues are elsewhere), while the other is a sort of full disclosure. Basically, I'm going to map out where I stand on the spectrum of feminist ideals with a short list of random thoughts about women and my relations with them. It's been a bit tough to write because while I've been outlining it in my head the entire week, it all breaks down when I sit down to write it out, even if it's to jot down the thought I just had. I've never really had that problem before, and it worries me.
Writing has always bugged me a little because I'm the kind of guy who sweats every word. When I draw or paint, there's only so much "undo" I can do, and I'm generally stuck with whatever I make. Most of the time, fortunately, I like it a little better than what I first envisioned. With writing, though, I've got infinite levels of Undo, with no real loss besides time. Doesn't sound like a big deal, though as I mentioned, I promised these two journal entries, I'm not going back on it, and I've got something similar to do that's for someone.
Oogle wrote a journal entry on her Tumblr that I've been trying to reply to since she first posted it. I'm not going to tell you which one. At first, I was going to relbog it and add what I wanted to say to it. As I gathered notes for it, though, I started to have doubts about doing that. On the other hand, while it's essentially a reply to her, it's written as an open letter to the people she mentions in the original Tumblr entry. If that makes absolutely no sense at all, that's part of the problem.

This is how my mind works most of the time.
I feel like it's starting to wear on me, but if I back out or drop it, I'll feel worse.

This was an idea I had been toying with throughout the week. I may well revisit this one (truth is I could probably draw her forever), as I meant for the dress to be impossibly long and flowing. Instead, I misjudged the size of my canvas, and ended up bringing the "camera" in a lot closer than intended. Ah, well... 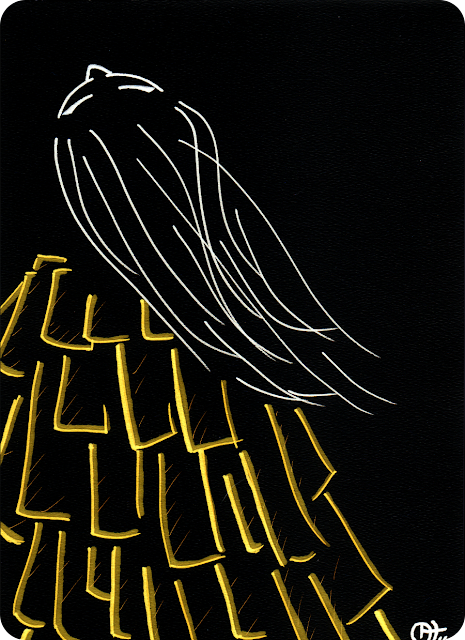 Voice of the Green and Blue Veiny Square

I went back and forth on a green version of the 0-2-7 minis, but I was using Sharpie pens for those (except for the one with the photonegative filter on it) and those don't come in green. I did, however, have a pair of "micro" Sharpies of different shades of green. This is the result of that. The lineograph was merely a fun afterthought.

While researching Marcel Duchamp for another project which may well be cancelled, I came upon his The Bride Stripped Bare by Her Bachelors, Even piece, and wanted something that would have a similar energy and starkness. Got a bit carried away, especially with the bottom of a cardboard box. 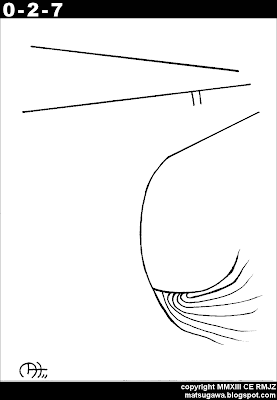 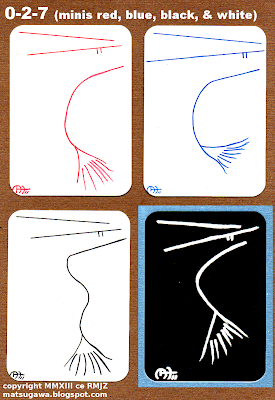 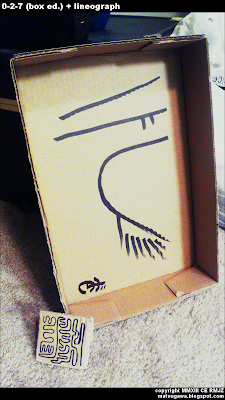