For as much as I put the URL for my Blogger page out there in my work, it may well be the site I neglect updating the most (with the possible exception of my Gamespot profile, but that doesn't quite count). I'd debated simply posting some of my recent artwork, which hasn't been anything terribly good since I'm focused on writing right now. I even resorted to digging up something I'd made years ago which was left in a drawer until recently. 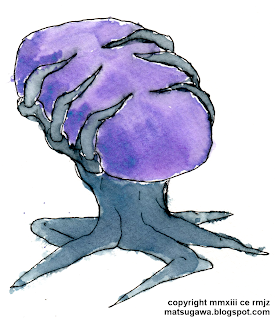 The problem is that a lot of my work is a bit scattered because I'm slowly transitioning to a new computer. This means I'm officially back to using Windows, specifically 7. Protip: if you're in the market for a new computer, especially a laptop, make office supply stores like Staples and OfficeMax priorities as they clearance things out all the time, making for some very good deals. I had considered going with 8, but I just couldn't get past the tile interface. I'll get a Windows Phone before I bother with the OS on a full PC. In fact, I'm working on putting together a bootable USB drive that will let me run Linux Mint on the laptop if I ever want to use my more familiar version of GIMP. The Windows edition has some serious drawbacks, mostly with regards to the text tool. Adding signatures and watermarks to my images should not be this tedious. In the grand scheme of things, about the only upshots Windows 7 gives me is access to Skype as well as the full and proper use of my new scanner. Other than that, unless I get back into editing videos, Mint was perfectly serviceable. Still, it's nice knowing I have genuine options and don't have to rely entirely on freeware to get things done. There's nothing wrong with freeware, mind, except that there's absolutely no real QA and upgrades and fixes depend almost entirely on the whims of volunteers. Some have donation options which could conceivably be a way of getting needed changes made, but it's ultimately a free service and therefore no one really has a right to complain.
Speaking of taking things for granted, I found out about a most curious phenomena called crossed letters. It's also called cross-hatching, but it's not referring to the sketching technique of using repeating and crossed lines to create shading. What it is, simply, is a means of saving on paper by turning the sheet 90 degrees and carrying on writing. The idea is that paper was not only expensive, but postage wasn't much better, so people made the most out of what they had and resorted to making their letters look a little something like this: 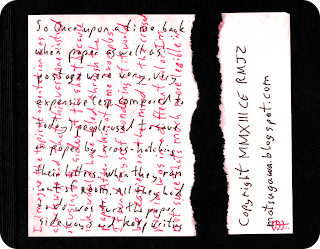 It's not the best example; most of the samples I found online were in cursive, which seems to work a little better than print (ironic considering how inefficient cursive actually gets when you try to make it legible). Still, it's said that with time your brain works out what it's supposed to focus on and you learn to adapt to the weird presentation. It's a neat little experiment worth trying sometime. It's like using a quill/dip/fountain pen or learning a simple magic trick or speed dating; something everyone should try at least once, if only for the character-building.

On a dour note, things around the place have been a bit strained. Tensions are high, and while discussions were had, they didn't leave much all that resolved. Let me put it this way: I know being disabled is a difficult condition, and it's important for others to be sensitive to it. However, there's a point where being "considerate" amounts to walking on eggshells and living a kind of  "nurse's sleep" that you not only feel trapped in, but are practically told you're supposed to lie back and accept because... there's really no good reason given, the closest to "sort of reasonable" being "if you've never experienced (blank), then you won't understand." which is kind of like saying only people with cancer have any business doing cancer research.
It makes me think of why I absolutely hate certain movies. Requiem for a Dream, for instance, commits what I consider the cardinal sin of narrative by trying to make me feel sorry for people whom I not only don't care about, but really want to get their respective wake-up calls. In short, a bunch of druggies try to "make it big" so take giant risks that either cost them their lives, their self-respect, and/or their freedom. The idea is that I'm supposed to scoff at these people, only for a naysayer to ask, "Well, haven't you ever had a dream? Didn't you make stupid decisions?" and instill in me a great epiphany that moves me to tears. Trouble is, relating to something doesn't mean you automatically approve of it. To put it another way, the stupid things I may have done, aren't things I deserve sympathy for, and probably wouldn't want it. To quote Star Trek V, a movie I sometimes feel gets erroneously mistreated, I need my pain. I've inadvertently sabotaged my own life at times, but not only do I not want a second chance to undo those screw-ups, I don't want people to feel sorry for me for them. Sometimes things really are black and white, right and wrong. Circumstances may count for many things, but it's not always a free pass.
What I'm saying is, I don't have to stick my hand in a fire to know it's hot, but that doesn't mean I can't warn people who want to see for themselves what all the fuss is about. As for sympathizing with those who get burned, well: How sorry can you really feel for an alcoholic? Sure, they've clearly gone through some awful hardships that have driven them to find solace in the contents of a highball glass, but at the end of the day, no one's force-feeding them the stuff, and you can only commiserate so much before you have to pick yourself up, dust yourself off, pick a path, and stick to it. That's more or less where I'm at, and one of those paths involves leaving someone to face the same challenge, and I never like to walk away from problems.