An Open Letter to Russia

“It will be particularly interesting in terms of psychology. They say that in one kitchen, two housewives find it hard to live together.”--Institute Director Igor Ushakov

Dear Russia,
What the Hell?!
Sincerely,
The 21st Century

P.P.S.
I mean, you used to be cool. You gave us vodka. You put the first man in space. You gave us the films of Andrei Tarkovsky. You helped create an entire field of photography around the principle of "So bad it's good". Have I mentioned your movies, yet? Mir was the first modular space station. You made soft landings on Venus.
at 07:10 No comments: 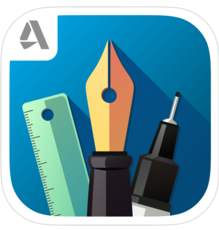 So, here's a fresh new discovery... that happened about two weeks ago.
I was browsing the App store to pad out my wishlist when I happened upon a new app from one of my favorite software companies, Autodesk. It's called Graphic, a vector drawing application for the iPhone and iPad which threw me for a loop at first because:
1) despite the trademark "A" and white border on the icon (sorry, guys, RCA did it better in the VHS days), the developer listed was some band of yahoos called Indeeo.
2) I couldn't find anything on the Autodesk site about it.
That second point isn't too surprising; that main site is a brochure laid out by someone who's never read a brochure in his life. Seriously, it's like they're ashamed of some of their mobile apps. Finally, simply putting "Autodesk Graphic" in a search turned up a dedicated site emblazoned with the typical trappings of an Autodesk page. There, all was made clear (emphasis mine):


Introducing Autodesk Graphic. Formerly called iDraw, Graphic is a professional vector illustration application for Mac OS X and iOS. We're passionately focused on making it one of the best design applications available, and we'd love to hear your feedback and suggestions!

There you have it. An old app got a fresh coat of paint, and a new sponsor. Normally, I'm a tad leery of such "new acquisitions" as it feels like the ultimate betrayal of any startup or other small company's implied mission statement of staying small and focused, expanding only on their own strict terms for better or worse. Then again, in this tough economic climate, it's important to be realistic, and a little rebranding goes a long way. Sellout is a hideous word that should be banished from existence, or at least reserved for the kind of betrayals that end with bodies getting dumped in rivers. I have no problem giving Indeeo the benefit of the doubt that they're still producing a quality app, now with better support than they ever could have hoped for.

I look forward to giving this new kid a tour of my studio.
at 08:20 No comments:

Also, an inadvertent monograph on the Quinnspiracy and TvW at the UN because that's what happens when you get into a flow talking about programming...

I talked years ago about the embarrassment of coming up with an idea only to find not only does it already exist, but it's so immensely commonplace and ubiquitous in your own life that it probably took more mental energy to forget it exists than for you to come up with it. This is putting a twist on that idea.
I don't know programming. I don't know programming at all. I understand some of the ideas around it, but the leap from text in C++ to HD graphics is almost abstract for me. I've tried writing text adventures, but HTML is about the best I can do, and Depression Quest* is pretty much the kind of game I would want to create, though not nearly as pro-social or insightful... or worth playing.
At one point, after hearing about all the various tools available, I had an idea to use one of these drag-and-drop interfaces to put together the laziest, most bare minimum "Hello, World"-shaming programs and then charge an absurd amount of money for it. Of course, I'm not saying I'm any kind of genius, much less that there's anything more than petty and opportunistic about such a venture, but I figure it's like snuff films; just because the idea is simple and plausible enough doesn't mean anyone's taken it all the way to reality. I know there's a proper name or attribution to the notion of, "if you've imagined it, someone else has likely made it" a more Zen-like perspective on the patent joke "anything that could be invented already has been". As for my "invention":
Even the most expensive Android app, which is capped at 200USD (but is available as a six app set), is at least a set of desktop themes. I wouldn't call that essential, but at least the developer has enough skill to not look like a shameless opportunist. Meanwhile, one of the most expensive apps on Windows phones is only a mere half-step above the app that I would create. Mine would even be called "the 1000 dollar app that does nothing" (this was before I found out about the price cap) along with a myriad of disclaimers in the description that this is literally a kind of half-hearted social experiment/get-rich-quick scheme. My thinking was that, by the law of averages, I have the power someone would buy it just to burn money and have the dubious honor of having spent a ludicrous amount on a frivolity.

*For the record, I have no problem with Zoe Quinn. I think the controversy around her has been absurdly blown out of proportion. It did turn my stomach a bit to see her alongside Anita Sarkeesian at the United Nations. As I've said about Sarkeesian, and as much as I legitimately like some of her videos such as the Lego one and even Ms. Male Character, she completely lost my respect with the Women as Background videos with their embarrassingly transparent misrepresentations of the games in question on top of the absurd premise of connecting real-world behaviors to in-game violence. Put simply, she's the worst person to champion her own cause, and while she certainly does not deserve death threats, I feel as though her issues overshadow Quinn's, who has been the victim of a massive, coordinated cyber attack and been accused of attempting to profit from the suicide of Robin Williams. To make matters worse, while I may not care about her personal life, the fact that there are so few women in the games industry does put her in an awkward position where her every inconsequential action carries absolutely onerous consequences. She shouldn't have to be an example, yet I don't think her position is discussed nearly enough.

I guess you could say the reason I care more about Quinn than Sarkeesian is that Quinn is making legitimate efforts to enact changes in the games industry, blazing trails between the paths less-traveled while Sarkeesian is a bloody backseat driver.

To put another way:

If a film critic and a filmmaker were drowning and I could only save one of them... Well, I like The Island and even Age of Extinction had its moments. Sorry, Leonard.

Final note: double-checking the definition of monograph to make sure I was using it right (you tell me), led me to this site which seems pretty damn awesome at first impression.
at 09:08 No comments: