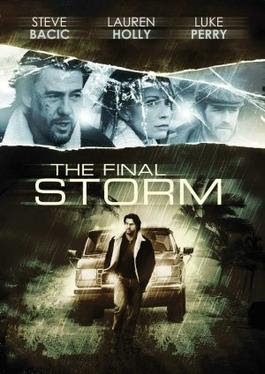 I love movies that question reality. American Psycho seems just an ordinary slasher film on the surface, but it's actually a richly complex character study with the most unreliable of unreliable narrators, a sociopath who views himself as an abstraction of his own perceived image. In the end, though, Patrick Bateman may well be the only sane man in a crazy world despite his rather unorthodox coping mechanism. The way in which the film brings about this shift in perspective and the relative ambiguity in which it leaves the relationship between the conflicting views makes it a cinematic masterpiece.

The Final Storm, by contrast, can't seem to make up its mind about what its reality is and what its ultimate goal is in telling the audience whether or not its suspicions are right or wrong. The marketing describes the film as a biblical Armageddon piece, a story of survival in the final days of man. It centers around a young family on a small rural farm amidst a two-pronged assault on their sense of security in the form of pessimistic news reports on television and strange weather patterns out their own windows.

Into the fold walks (or rather stumbles) a stranger named Silas, played by Luke Perry, who is unable to recall his past at first, but slowly reveals a rather ominous connection to the farm's history, one unknown to its current residents until the third act. Said residents are a husband and wife with a teenage son, the wife a former bar hostess, the son a typical rebellious teen, and the husband a struggling farmhand with a drinking problem. What plays out prior to Silas acting out his hidden agenda is typical survivor fare, with trust at a premium, suspicions getting thrown about wildly, and a foreboding sense of dread as events begin to mirror those described in the Book of Revelation, quoted frequently through and out the film. Apart from the strange weather patterns such as snow in June and mass hysteria including looting and savagery, other telltale signs of the end times are less obvious until pointed out by Silas, namely the disappearance of all animals including crickets and birds as well as a blood moon in the night sky. All this would seem to be building up to a grand finale, with the stars being extinguished from the sky one by one like candles pinched by a pair of wet fingers.

The problem is, while this ending ultimately arrives as prophesied, it practically comes out of nowhere when the film shifts gears and turns the enigmatic Silas from a kindly and knowing stranger to a straight-up pious nutcase with a perverse sense of justice. This shift in character feels forced and clashes harshly with the film's more grandiose backdrop of the end of all existence. Imagine if the eponymous shark from Jaws disappeared toward the third act and was replaced by Billy Zane's character from Dead Calm, only for the shark to reappear at the end to sink the ship and kill everyone in one fell swoop. That's the problem with The Final Storm; it's really two movies in one, but one film is insubstantial on its own and the other can't quite cope with the cramped quarters it shares with its traveling companion. In the end, we're left with half of one movie and a fifth of another presented as a whole that starts things off well enough, but falls apart in the third act, attempting to make up for its bait-and-switch structure by harkening back to the impending doom mentioned at the start.

Normally, in films this pessimistic, the ultimate end is a kind of incentive for characters to complete their respective arcs, reconcile any differences, bury any hatchets, and free any otherwise closeted skeletons, with the deus ex machina of the apocalypse serving as a kind of final release that everyone (characters and audience alike) can feel humbled but strangely relieved by when the time comes. Here, it's a rush job, tacked on as if to distract the audience from the wayward pacing and uneven characterization. Needless to say, it doesn't quite work, and the end result is notably unsatisfying.
at 01:35 No comments: