Waltzed into a Gamestop today and finally got a straight answer about the status of the WiiU. After noticing it disappear from shelf stores, seeing a few conflicting statements of questionable credibility (redistributing stock, ceasing production in Japan...), and seeing a few WiiU games on my Amazon Wishlist skyrocket into scalp/flip/gouge territory, the console is dead. Breath of the Wild will be the last game released for it, and that's coming about a week or two after the Switch edition. I'd held out this hope that the reason for the discontinuing was for the sake of a redesign. This whole "Pibb Xtra" sort of switcheroo is nothing new to the likes of Sony, given the sheer number of redesigns for the original Playstation, to say nothing of dos and san. It's not even anything new to Nintendo, albeit their Wii-Mini was a disappointment on a colossal scale... and jury's still kind of out on the GameBoy Micro. Sadly, the math is against the world's oldest Hanafuda-maker; with the sole exception of the Wii, every console since the original NES has sold worse than the last.
The SNES took blood out of Mortal Kombat.
The N64 stuck with cartridges.
The Gamecube was Johnny-Come-Lately after the PS2 and XBox.
The Wii won... by the law of averages at best and a fluke at worst (*cough*shovelware*cough*).

None of these points was at all the notorious blue shell that crashed Nintendo's kart, except that they do speak to a handful of overarching problems with how Nintendo conducts itself.
The Mortal Kombat Kon--Controversy plus Sega's aggressive infantalizing campaign against Nintendo didn't help them shed their image as the Disney of games, closing out an older audience with bigger wallets. Madden football may have played a big part as well, but let's stick to bullet points.
The cartridges in the 64 further showed that Nintendo really was not the fit-in/play-nice type with 3rd party developers, especially Squaresoft (who took their franchises and legions of fans over to camp Sony).
The GameCube appeared at first to carry on the "our way or no way" philosophy of the 64 with its quirky "not quite mini-disc" format while its competition offered CD and DVD players.

The WiiU's failure... is somewhat hazy right now. Some say the marketing made it sound like a peripheral (wouldn't that have generated MORE interest, though?), others say the marketing fell back on bad habits and forgot how old their core audience had become, and still more point to the one-two punch of a novel interface with barely-there third-party support (small library, fewer readers). My own idea is simply that they could have waited; Sony proved with the overlap between each generation of Playstation that the five-year cycle is a joke, barely an observation and certainly not a law. Hardware is not even half the equation when it comes to consoles; people will come for the specs, but stay for the games.

Going back to the Gamecube, for as shameless a Sony fanboy as I am, for as invested as I became in all it came to offer me and deliver upon, I stand with Caddicarus (an even more shameless fanboy than me) when I say that if I had to pick between the two, I would legitimately take the GameCube over the PS2 any day of the week. It's a great console with superior hardware (Metroid Prime still looks better than Halo 2), a surprisingly liberal third-party policy (SEGA, anyone?), and a games library which ultimately favored quality over quantity. Like the WiiU, I think their problem with it was itchy feet. Metroid Prime 2 and Twilight Princess alone showed what untapped potential there was in that off-the-shelf Radeon card; there's no reason they couldn't have buoyed themselves on their handhelds while letting the Cube find a stronger, more loyal audience. Hell, when I was looking into springing for a U, my wishlist only had two items on it, both HD upgrades of perfectly adept Zelda games I already had for my perfectly viable Gamecube. I guess all I truly wanted was a backup with benefits, a silver medal with no strings attac--okay, I'm not doing myself any favors here.

As for the Switch, I genuinely just now caught a glimpse of the new Bomberman title for it while writing this, and I am now officially excited. I'm no longer worried Nintendo may be jumping the gun and not giving the U the chance the Gamecube never had. I don't think I'll be going the early adoption route, but I don't see why there won't soon be a Switch happily docked next to my TV.
at 22:11 No comments: 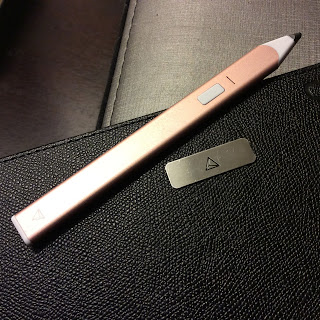 The Pencil by Fifty-Three is a stylus I fully expected to hate. I felt legitimately insulted by the way it was marketed as an artist’s tool while looking like a carpenter’s pencil. That’s not to say carpentry isn’t an art, but there’s a reason they’re called carpenter’s pencils and not architect’s pencils. Luckily for Fifty-Three, I was utterly blown away when I started using the Pencil with Procreate. The smudge and erase functionality are a perfect fit and I never want to use another stylus with it. Other apps like Autodesk Sketchbook or Tayasui or the Adobe family were less than impressive, but only marginally.

In the end, my only true complaint about the Pencil is the tip. Compared to my Elago and particularly my Sensu, it is extremely soft, more akin to a brush than a pencil. There’s a reason spare tips are included in the package and available as an accessory. 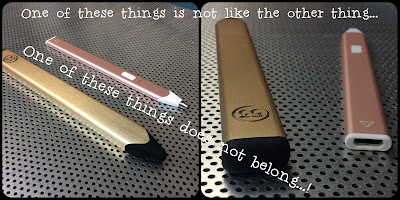 When I saw Adonit offering what appeared to be their answer to the Pencil, I got very excited. It seemed like the best of both worlds, the combined precision of Adonit’s Pixelpoint tip with the ergonomics of the Pencil’s carpentry aesthetic. Before things started to look too good to be true, a closer look revealed some notable differences that should allow the folks at Fifty-Three to rest easy. The Snap may copy the look of the Pencil, but only because of hand models being required to have a handspan no wider than an infant’s. The Snap is astonishingly thin and small compared to the Pencil, but the width is still enough to feel comfortable in the hand. An open charging port at the tail-end means no eraser function like the Pencil, but it beats having to disassemble the latter and leave its innards jutting out of a USB port. 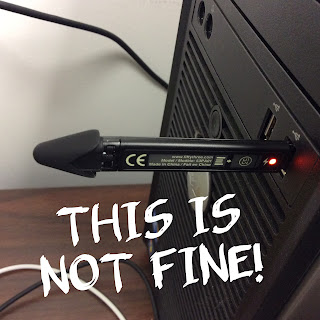 Instead of the kind of Bluetooth functionality many higher end styluses allow for iPad artists like palm rejection or mapping un/redo functions to the buttons, the Snap takes an odd route and finds serendipity along the way. There is a single button on the Snap, and when paired with the iPad, it acts as a shutter button for the camera. Most selfie sticks or other mounting accessories have some kind of remote shutter function, but this is the first I’ve ever seen it in a stylus. That’s a pretty hoopy piece of thinking there; even the slimmest selfie stick is nowhere near as convenient or spontaneous as the stylus you’re already using to take notes or sketch with. Besides, no one’s daily routine should ever involve asking themselves, “Should I take my selfie stick with me?” Joking aside, having a remote shutter function for your phone helps keep the camera stable instead of slightly bumping it when tapping your screen or clicking one of the volume buttons. 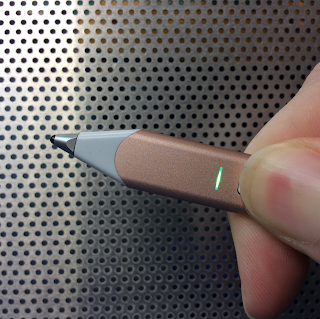 The button itself makes a barely-audible click and has virtually no travel. It might as well have been a membrane activated by squeezing the body of the stylus. I suppose Adonit doesn’t expect people will use the button often enough to give it better tactile feedback, but I do hope either I simply got one that slipped by QA or later versions of this will be improved.

Fifty-Three offers 3 different versions of their flagship product, one a matte black, the second a glitzy gold worthy of Dolce and Gabbana, and a walnut finish that adds a magnetic snap for Apple’s smart covers. The Adonit Snap, true to its name, offers a metallic look similar to the gold (mine being a rose gold) with the ability to mount it to a cover… provided you use its included magnetic plate. To be fair, even without it, it’s clear Adonit put in a strong magnet inside the Snap. Getting it out of my bag should involve placing bets on what other accessory I’ll have to pull away from it. 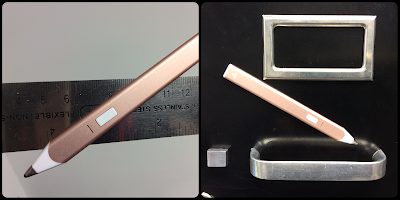 As much as I don’t like to put the cons last when I review things, I didn’t want to lead with the elephant in the room, especially since this isn’t a fault of the Snap specifically. I have never liked how these thinner tipped styluses feel against my screen. For all I may gripe about my other styluses, I will give the rubber tip its due credit in giving me a good, solid, tactile feeling of making my mark on a surface. There’s weight, gravity, and grip in my movements, and it’s all reflected on screen. With Adonit, however, that’s all but missing. While it’s technically impossible for the hard plastic tip to scratch the screen’s smooth glass, it takes a lot of mental training to talk yourself down from that ledge of anxiety. The sad part is, there’s still no getting past the sensation of rubbing a nail against glass… underwater. The weight, gravity, and grip of a “crayon-like” stylus gets traded for something that looks to all the world like pen on paper, but feels like neither. Movement is slippery, weightless, and overall disconnected. I feel like I’m giving vague suggestions to my canvas than making my mark. It’s the same problem I had when I tried using a Wacom Bamboo tablet on a desktop, like I was telling someone how to tie their shoes… underwater and using vague suggestions.

I’ve heard a solution from some digital artists involving screen protectors. They supposedly help give the stylus more of a grip to the surface by simulating the “tooth” of paper. I haven’t tried it, but since you should protect your tablet somehow anyway, it may be worth looking into.

It is not a great iPad solution unless you really like the remote shutter button, but don’t want the bear the shame of owning a selfie stick. Albeit the price point is alluring, the fact is if you’re going to take illustration or notetaking even remotely seriously on your iPad, there are better options for not very much more coin, many from Adonit themselves. On the other hand, Android users will find this a very handy, convenient stylus, even without the shutter button. The thin profile, magnetic snap, and precision point will feel like a natural extension of your phone, turning any brand’s model into a Samsung Galaxy.