I am on a roll with picking up cigar boxes. Went to another grocery store a little farther away than my typical one, and found these two (this Camacho box is practically furniture, it's so decadent). Had to kinda play the squeak-wheel-get-grease game which I hate playing; I hate being pushy like that and I hate putting people on the spot when they're just doing they're jobs (and I've worked retail and customer service, so I speak from experience). In my defense, I had no intention of pushing the issue if it was a legitimate store policy (like sending them back to the distributor as proof of sale or something). Also, the kid just handed me the keys to the case from over the customer service counter. That's plain irresponsible. Lastly, given that our dialogue on the matter boiled down to:

I don't think it's unreasonable to set a precedent. To his credit, he offered to call up the head honcho and get some clarification. He came over and said it was cool to give them away as long as they were empty. I guess they've had a problem with people simply offering to take the boxes before their contents have been sold off. That's understandable given that some of these boxes are humidors. 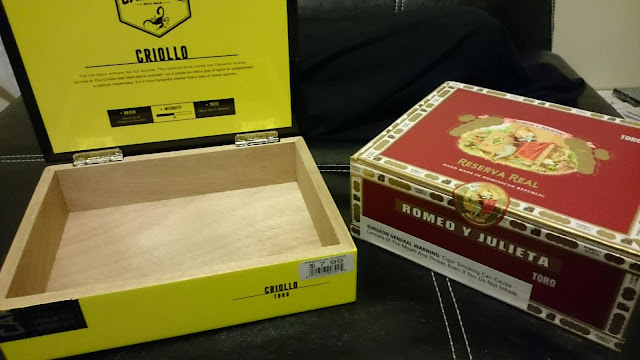 Fortune Smiles Upon the Resourceful

Score!
It's not the brand I was looking for and there's a small crack near the lid, but it's got an interesting shape and it didn't cost me a dime. A quick grocery run for some frozen vegetables and a watch battery led to me finding this empty box atop the cigar display case near the customer service counter. A rep asked me if I needed anything out of the case. I turned to him and said I was interested in the box. He seemed a little disappointed, then thought a moment before saying, "You can have it." I was all set to interrupt his thoughts with an offer, but I lucked out.
Incidentally, I was ready to put the cigar box idea on hold that very morning when I got the idea of using decorative tape on a Christmas tin for another quad synth. I've also decided to sacrifice a Star Wars tin I got with a pen to the cause. 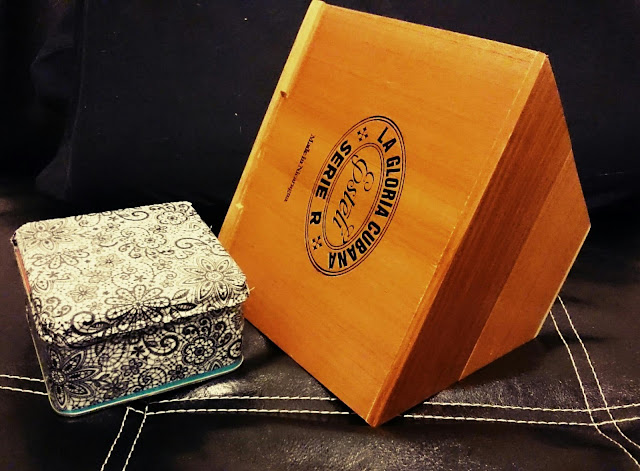 Waiting on a Habit

My Arduino-based synth is effectively bricked for the time being. It's not because of technical difficulties beyond the makers of a toggle switch not wiring their own product properly, but because if I'm going to do this, it's got to be done right. Plain project enclosures are fine for starting out or maybe if you wanted to sell your electronic creations. However, instruments should be unique, even if it's all cosmetic customization.
After looking around at some lacquer Bento boxes, which hold promise, pretty much all DIY synth tutorials and enthusiasts led back to the same resource: cigar boxes.
Specifically, the kind I'm looking for is from a company called Cohiba. I like them because the boxes are black (I'll save the wood grain for more Atari Punk Consoles) and, most importantly, their name looks and sounds an awful lot like Toshiba. The first time I saw their name, I did a double-take; even the font is vaguely similar. It's too good a piece of irony to pass up. Of course, eBay is a good resource for empty cigar boxes, but there's a small tendency for markups. Cigars are meant to be savored, so there's not much turnaround. Cohiba in particular seems to be quite popular with collectors (I wonder how many of them are making synths as well), so I thought I'd be clever and try to find some cigar boxes locally. I went to a nearby grocery store to scout out the selection and see who I had to sweet talk into selling me one. Smoke shops have this down to an art form, as I understand it.
When I got there, I discovered something that would have never occurred to me would be a genuine thing people do.

Some boxes have Post-It notes on them with names and numbers, plainly visible. Seriously, the fits people throw over privacy agreements on Facebook and Playstation Network, and here's someone's name and number in a glass case by the checkout lanes at a grocery store. If I want a cigar box from a grocery store, I have to wait until that particular brand is sold out before I get a call, during which time my name and number will be on display. I somehow doubt even the greenest cigar aficionado thinks of the place they buy beer and steaks as their go-to spot for cigars, so I'd be waiting on that call for months on end.

So, eBay it is, then. Harumph. 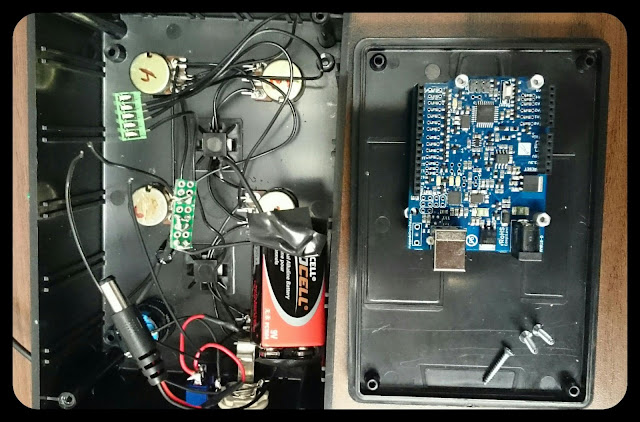 Prelude to An Incoming from A Far Off Place

Tydirium Unplugged (fun with a crossfader)