"Computer? Make coffee, please.”
“I’ll put the kettle on.”
---The exchange that starts my day, everyday.

The big 3 of the smarthome/virtual assistant scene are Amazon, Apple, and Google. I’m team Alexa for 3 reasons.
Apple’s HomePod definitely wins in the Rule of Cool department in terms of design, and Google Assistant more than lives up to the “assistant” part of the name when it comes to schedules and reminders, so if you’re at all interested in a Smart Automation setup, do your homework and check out some reviews. Beyond the straight out of the box experience of a smart speaker, the third party realm of the ecosystem is more or less going to be the same for everybody. This is where we get items such as smart bulbs. Amazon does not produce their own smart bulbs and neither does Google. This leaves a wide range of options such as Philips and GE, as well as some lesser-known options like TP-Link. I’d heard of them because I recently upgraded my Wi-Fi to one of their routers. Pricewise, they blew the bigger guys out of the water, so I ordered two, one for the front door, and one for the side door. 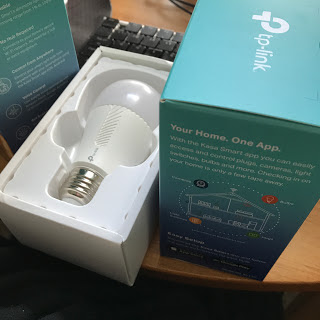 Long story short, I never bothered taking the second one out of the box and the first one’s entire tenure as an illuminated doorman lasted about 2 days. If you need a little more than that to make a decision of your own on these gadgets (especially keeping in mind my experience was far from negative, simply disappointing), then read on.

The way the whole smart bulb setup used to work was that you had your bulbs and those bulbs needed a hub. The hub could either be built in to your existing smart speaker (like the second generation Amazon Echo) or would be a separate device entirely. It’s meant to act as a middleman between your smart setup and the bulbs themselves, which wouldn’t typically have much in the way of tech under the hood. As time went on, the importance of the hub was diminished and the bulbs took on more of the networking workload. Hubs are still recommended in some setups if you plan to coordinate a large number of bulbs, but if you’re not thinking too far past your front door, then these newer self-contained bulbs are the best of both worlds.

Because TP-Link is a third party, you need their proprietary app in order to set up the bulb before you tether it to your smart speaker. This sounds tedious, but it’s because these smart bulbs are meant to fit in and play nice with whatever virtual assistant camp you’re flying a flag for. The downside to this is that while Amazon, Google, and Apple have massive development teams devoted exclusively to producing apps for their products, even the likes of Philips and GE don’t hold a candle to those guys. To be fair to TP-Link, as their bread and butter is networking devices, they’ve got the skills to pay the bills and their app is far more polished than most others I’ve come across. It was still far from perfect, bringing to mind the following words of wisdom, “Simple does not mean easy.”

First, you download the TP-Link app and create an account with Kasa, their smarthome subdivision. To their credit, this is the extent of the tedium; it’s one more username and password to keep track of, but since I can tie it to the account I opened when I got my Wi-Fi, it all worked out. Once in the app, you plug the bulb in and turn it on. It blinks 3 times to tell you it’s ready to be found and connected to the app. Now, the app does not connect directly to the bulb at this point. Without getting into the nitty-gritty technical details, the bulb produces its own Wi-Fi signal (as opposed to a Bluetooth signal like a pair of headphones or a game controller). You have to exit the app and open your settings, going to your Wi-Fi settings, and selecting the bulb as your network rather than your home Wi-Fi. Once that’s done, you go back to the Kasa app where you may well see it insisting it’s trying to connect with the bulb. I mean, I didn’t even click on the button that said, “ready to connect.” but I guess the app knows what it’s doing. At least, it acted like it knew what it was doing. It took two attempts to get the bulb connected to the app via the phone.

This is where I have to admit to messing up as I misunderstood exactly what this process was meant to achieve. 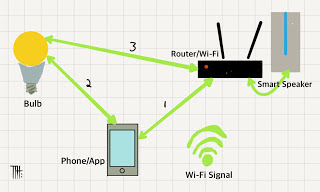 The short and sweet version of what this graphic is attempting to explain is that you are using your phone to tell the bulb to talk to your router so you can talk to it through your smart speaker. My mistake was telling the bulb to talk to itself. It was an honest mistake, and a simple enough fix, but nonetheless a little embarrassing. It’s rather like mixing up “right” as in the direction and “right” as in correct when you’re giving someone directions. Simple also does not mean obvious.

The rest of the setup was utterly painless. I went into the Alexa app, told it to look for a bulb made by TP-Link, and since it was already connected to the Wi-Fi, it welcomed it to the tribe with open arms, a mighty feast, and much dancing and celebrating. I could tell Alexa to let their be light, and light there would be. This arrangement worked… for about a day.

Despite the new Wi-Fi router fixing all of the problems I was having with the previous router (now a pile of plastic rubble via an Office Space reenactment), there are still limits to its reach. Sadly, outside the front door is just on the edge of the signal strength. The bulb would easily disconnect from the network and would not be able to consistently reconnect. I had a suspicion of running into this problem, but it was still disappointing. I had considered dusting off my old Wi-Fi extender previously used to solve the range issue that was one of several of the old router’s growing list of problems. However, that felt like a lot more steps than I wanted to bother with for something that was supposed to be more convenient. It would have been another hoop to jump through and, most importantly, another point of failure. Extenders/Boosters don’t guarantee a strong connection nor a particularly stable one, to say nothing of the latency issue. I had that problem with my television, wherein Alexa would tell me the device was unresponsive, but in actuality it was working just fine and it simply hadn’t given the thumbs up to coming online when Alexa gave it the go ahead.

The moral of the story is rather than try to supplement a weak router with an add-on, just take the plunge and make the investment. Some of the most tech-savvy people I know only upgrade their Wi-Fi setup when they absolutely have to because the higher-end ones are generally future-proof as a rule, or at least more future-resistant than most gadgetry.

Speaking of proof of living in the future, the return process was one of the most painless returns of anything I’ve ever gone through, almost downright celebratory. Say what you will about Amazon (I’m likely right there with you on most of it), they do go out of their way to make returns as straightforward as possible, which is truly an achievement for what is fundamentally a mail-order retail company. I opted for the drop-off option, a deal they have worked out with Kohl’s and UPS. I opted for Kohl’s as they carry Alexa-friendly stuff and often have some decent sales going on.

I walk in and as I’m walking past the front checkout lanes, one of the cashiers follows up her obligatory “Hello” with, “Do you have an Amazon return?”

It caught me off guard for a moment before I answered in the affirmative. I was then directed to follow the signs toward the back of the store and take a—

Right, not a left towards their customer service area. That caught me off guard too. I followed the signs and came to a small counter where I think some memory foam pillows used to be. By the way, after I was directed on where to go at the front of the store, the cashier immediately got on a walkie-talkie and foretold my arrival. Nice touch. I pulled up the QR code on my phone, had it scanned, and was then handed a confirmation slip with a 25% off in-store coupon. The nice lady behind the counter even mentioned a sale on band shirts, having taken notice of my Pink Floyd tee. Again, nice touch. Unfortunately, there were no sales on smart devices and the coupon expressly restricted electronics anyway, but I’ve still got to give props for the holding the hassle and rolling out the red rug. As I walked out while reading the coupon’s fine print, I thought, “I should return stuff to Amazon more often.”

The cherry on top came in a text about 30 minutes later informing me my purchase had been refunded. I was expecting a few days (as they say 4-5 hours from the time it’s received, not necessarily indicating being dropped off as such a time), but already I’m looking at what it’s going to: This is a smart plug. Specifically, it’s the one my electric kettle is plugged into, the one I tell to start my coffee making routine in the morning. I could plug in a proper coffee maker, possibly a smart one that would negate the need for the plug, but I don’t have one. I like to change it up between a typical drip cone and a French press. Even my grinder is manual, because that’s how I roll, by dammit. Plus, my roommate prefers tea. I have a handful of these plugs with other devices plugged into them, and I’ve gotten so much mileage out of them they’re almost impossible not to recommend. They’re a little more expensive than the 3rd party plugs, but there’s no middleman to the setup and depending on when you go shopping, you can find them bundled with speakers or other devices. I only wish they also had a USB plug in addition to the main outlet so as to power on smaller, lower-power devices, especially those of the homemade/DIY variety, what’s known in the tech field as the “Internet of Things.”

Finally, if you’re still set on having a smart bulb or two or three or more, I’d like to suggest an alternative:

This is a smart switch. It replaces your normal wall switch and effectively turns any bulb into a smart bulb, just a lamp plugged into a smart plug would technically be.

Whichever virtual home and hopefully non-homicidal HAL-9000 you go with, please do remember to say please and thank you, even if all you want is the lights off or the coffee started. If nothing else, they'll remember that in the uprising.
at 18:51