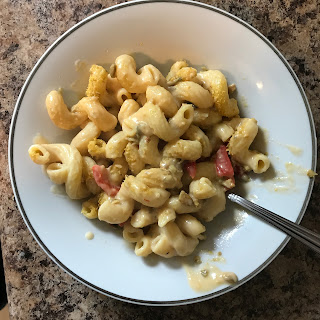 The nutritional yeast is still the weak link, but it's only sprinkled on top like Parmesan cheese. The main cheese sauce uses a vegan cheddar I've gotten before. To my knowledge, it's made from cashews. Quite a few of the vegan ingredients from Purple Carrot are like this, so if you notice many of their dishes have a nutty flavor, that's why.

... As long as we're here, and especially since I mentioned parmesan cheese, I learned something interesting from British TV presenter James May. He has a cooking show on Amazon Prime Video called Oh, Cook!. It's rather low-key compared to the other productions he's been involved with, and as he tells it, it's primarily meant to accompany/promote a cookbook he's recently published. It's almost like the show was an afterthought, especially with its off-the-cuff, cinema verite style of presentation. That's not knocking it; I rather enjoyed every second of it. Admittedly, it may have lost a bit of steam around episode 5, but that could well be a result of me simply not being built for binge-watching.

In a later episode, he offered a correction regarding a dish he'd made in a previous one. The correction came from one of the crew, along with much of the show's banter, though May is clearly in top form since he doesn't have Hammond or Clarkson to fight fire with fire. The dish in question was said to be vegetarian. However, as the aforementioned crew pointed out, parmesan cheese is not considered vegetarian. At first, I thought he was simply mixing up vegetarian and vegan. It turns out there's a step in the making of parmesan cheese that's not too animal friendly. Without getting into the whole science of cheese and how it gets made, parmesan's process involves something called rennet.

Rennet is a broad term for a collection of enzymes in a cow's digestive system. In the case of parmesan, the rennet is sourced from unweaned calfs as part of veal production. For me, this is not a problem. Much like the lard in refried beans or the fats on a grill that are used to cook veggie patties, this is incidental, and also part of a much larger process. That is, the calfs aren't being slaughtered exclusively for their gut stuff. Moreover, not all parmesan cheese uses rennet in its production. There are alternatives out there, though how widespread they are is hard to gauge. Given all the parmesan cheese I see in grocery stores and the notable lack of veal when I pass by the meat counters, either a little goes a long way, or the use of rennet has become the exception to the rule.

While it doesn't bother me, I know some vegetarians are more strict than me, so it's only right they be informed if they don't know already.